How to persuade your boss to buy you an iPad 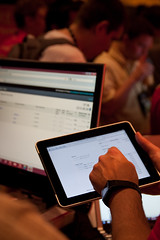 When we kicked off our SQL Response 2 project last June, we decided to rewrite the product from scratch. Early on, the team decided that it would be web based. It would be easier, they claimed, to write cleaner code and create a more modular user interface. They talked about ASP.NET MVC, jQuery and separation of concerns. I think they mentioned that the flux capacitors would run faster that way too.*

Oh, and you’d be able to monitor your SQL Servers from your mobile phone.

Like anybody would want to do that. What a dumb idea, monitoring your servers from your Blackberry.

And then, six months ago, Apple launched the iPad. Monitoring servers from a mobile device suddenly doesn’t seem so dumb. But we didn’t realise that until Tech Ed a couple of weeks ago when Ben and Gareth showed SQL Response 2 running on an iPad to a bunch of DBAs:

If you’re a sysadmin, you need to be able to keep an eye on your servers wherever you are. You might be at your desk, wandering among your boxes in the labyrinths of your server room, or eating a sandwich on a park bench.

This is an argument you can easily, and justifiably, make to your boss. To make it simple for you, I asked Gareth, who used to run our IT at Red Gate, to put together an e-mail you can use. Just copy and paste this text, personalise it and send it to your boss:

Now we’ve deployed SQL Response, we can start to use the access-anywhere benefits of the web application. It needs to work just as well from the park or the co-lo facility server as from my desk.

To do that, we’ll need some kind of portable device with a rich web browsing experience to get the best of our investment. The selection criteria should be:

Having done a full survey of the alternatives, it seems that the Apple iPad might fit the bill. Please can I borrow your company card to purchase one to evaluate?

SQL Response 2 could be the killer app for the sysadmin’s iPad. The early access program is now open to the public. You can find out more and download it from here.

*Of course, what they really meant was that it would be cooler and more fun to build if they used some shiny new technologies they hadn’t used before.