"The knowing-doing gap" – a book review 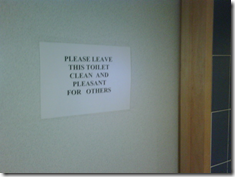 In the Matrix, when Neo wants to learn kung-fu all he has to do is upload a fighting module. A few seconds later and he’s sparring with Morpheus in a virtual dojo. Living in a computer simulation and being bred as an energy source for a machine master-race has its disadvantages, but at least you get to learn stuff fast. Here in the real world, much knowledge is gained the hard way – by doing. You can’t just upload it. Or store it, index it or e-mail it around.

This is one of the factors behind what Jeff Pfeffer and Bob Sutton call ‘the knowing-doing gap’. In their book of the same name (‘The Knowing-Doing Gap’, available new for under $25 from Amazon), Pfeffer and Sutton examine why companies don’t do what they know they should. The first problem is language. ‘Knowledge’ is a noun, so we treat knowledge as a concrete object we can manipulate, like steel or books. In reality, it’s a process; the process of riding a bike, speaking French or running a company. Hence companies don’t truly know what they claim they do. They might have their mission statements written down on small, laminated cards; and they might say – and even believe – that people are their most valuable assets, but this isn’t true knowledge, and won’t become so until they act.

Pfeffer and Sutton give plenty more reasons too. An emphasis on talk, rather than action, for example. It’s easier to judge people on what they say than what they actually do, and that’s often how we hire, reward and promote. The guy with the quick put-downs, rapid-fire banter and sarcastic comments is perceived as smarter than the quiet one in the corner who bothers nobody, knuckles down and gets stuff done.

The weight placed on talking means that planning, documenting and presenting are considered substitutes for concrete action. They’re certainly easier. Action is difficult, and can go wrong. That’s when another factor comes into play – fear. If people use their initiative, or challenge an assumption, then they often fear they will lose their jobs or the respect of their peers or their boss. Unfortunately, high-profile, charismatic asshole CEOs (Pfeffer and Sutton use the example of ‘chainsaw Al’ Dunlap, but there are plenty more) propagate the myth that fear is a great way to motivate people.

If action is harder than talking, then mindless action is harder than thoughtful action. When organisations hit a problem, rather than think it through afresh they tend to follow the path laid down before, often by people long-gone and in circumstances lost in history. Processes fossilize and are never challenged. Sacred cows get fat when they should be slaughtered, just because “that’s how we do things round here”.

Yet another cause for the gap is that companies send the wrong signals. They might say – and the managers might know – that they should hire great people and spend time developing and keeping them, but they measure short-term financial performance. What are managers expected to do? Free up a good sales person so she can work on a cross-divisional project that will benefit her – and the company – in the long-term, or hit the numbers? By measuring – for example – quarterly revenues, companies signal that they expect the latter, even though the former is what they really want. No wonder it doesn’t get done.

Finally, internal competition, whether it’s bonuses determined by forced-ranking or having an employee of the month, is often a zero sum game that benefits some individuals but that harms entire organisations. In such competitions, there are two ways to succeed. The hard way is to out-perform your coworkers. The easy way is to sabotage them, or belittle their achievements. It’s no surprise that many people settle for the easy option.

This is a fantastic book. Like most of Pfeffer and Sutton’s work, and as you’d expect from two Stanford professors, it’s based on solid research. Case studies are used to illustrate theories and bring them to life, rather than to ‘prove’ them as many business books do. As well as explaining why the knowing-doing gap exists, the book gives ideas on how to fix them. Is your organisation paralysed by internal fighting? Then find an external enemy to focus on – that’s what Apple did with IBM when they launched the first Macintosh in 1984. Is your company trapped by its history? Examine, make explicit and challenge the assumptions that lie behind its sclerotic procedures. Are your people afraid to make mistakes? Make it explicit – with your deeds and not just your words – that there is a soft landing available for those who try and fail.

The beauty of this book – like other works of Pfeffer and Sutton – is that much of it seems like common sense once you’ve read it. Pfeffer and Sutton have a knack of articulating ideas that you feel you already half know, but that are just – but only just – out of your grasp. As you read, you can sense them coming into focus, crystallizing out of the fog of your mind. Of course concentrating purely on short-term financial success can kill a company’s culture. Of course you should commit to metrics that reflect, and don’t contradict, your underlying philosophies. Of course pitting colleagues against each other is going to backfire, and of course the absurd idea that this could ever work is based on sloppy sporting analogies. But it’s only once Pfeffer and Sutton have made these points – and many others – lucid that they become obvious.

This is an excellent book, but as Pfeffer and Sutton acknowledge explicitly throughout, it contains one flaw. A text whose thesis is that knowledge can only be earned through action, and then hopes to teach it through words, is bound to have only partial success. Read this book – and if you’re running, or working in, any organisation larger than a handful of people then you should – and you will only have taken the first step to learning about the knowing-doing gap and how to fix it. The next step?