Why there's nothing special about the business of software

Software businesses should be infinitely scalable, right? You've done the hard work. You've built your product, your money making machine. All that's left is to turn its frictionless handle and churn out uncountable quantities of dollar bills. After all, the cost of shipping your creation's sweat-filled bits and bytes to your next customer, and the customer after that, is zero.

But that's not what happens in real life. Take a look at this graph of revenue per employee*, generated from the 2008 Software 500 data: 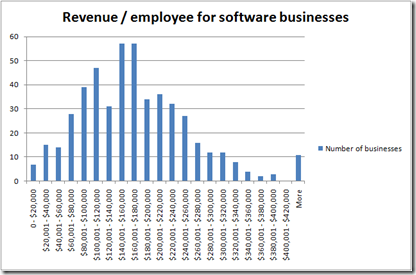 In 1980, Theodore Levitt – Harvard Business School superstar professor – wrote that there is no such thing as a commodity (or more accurately, there need not be such a thing as a commodity). In 1986, Bill Davidow – erstwhile product crusader for Intel's 8080 and 8086, now venture capitalist – expanded this theme beyond commodities and wrote about the concept of 'device' vs 'product'. In Davidow's terminology, a device is the good that, at first glance, you sell. It's the coffee beans, the silicon chips or the bits and bytes of your software. But the product is what you really sell:

Of these, only the first is scalable and easy to supply. The rest require people to deal with customers, communicate with the market, investigate new opportunities, build brands, grow communities, write documentation, create a company culture and so on. Those are the activities required to decommodify the bits and bytes. They're not cheap and they don't scale.

But if you want to grow, they're the most important things you need to do**.

(* Yes, I know that revenue per employee isn't as important as profit, but they're the numbers I've got. Also, these numbers are from the Software 500 so may not be truly representative. But they illustrate my point that software businesses don't, on the whole, scale).

(** Assuming you've done the hard – and it is extremely hard – work of building the bits and bytes already).