Is your marketing "Hot or Not"?

This is important for marketing. Photos and images of people are used extensively in marketing and are especially significant in things like blogs, twitter and facebook. The fact that Seth Godin has chosen an iconic, professionally taken, image of himself to accompany his blog isn’t a coincidence.

As I was espousing my professional-photo-attractiveness-is-important-for-marketing theory to a couple of friends who were at my house for New Year, I realised that rather than just spouting off we should do an experiment.

First, some background: like most teenagers, when I was 16 years old I was self-conscious about my appearance. I was convinced that I was the least attractive boy in my class: gangly, crooked-nosed and spotty. One day in math class Mr Ranson conducted an exercise in a statistic module. He lined up all the boys in the class and asked the girls to rank our attractiveness. After standing awkwardly at the front, my worst fears were realised: I was indeed the most unattractive boy in the class. The case for the prosecution was overwhelming, with 12 out of 14 girls supporting the last-place ranking. Mr Ransom then burbled on about different methods of collating ranking but, unusually for me, I wasn’t taking it in. I was absorbing a more painful lesson about the shape of the probability density function of my getting a date within the next millennium.

You can imagine how this might have left me unwilling to subject myself to another public vote on my attractiveness. But the occasion, my theory and the wine led me to shed a few inhibitions and have a go with myself as the guinea pig.

So I’ve created two new characters for the dating website HotorNot, which asks visitors to rate the attractiveness of people on a scale of 1 to 10: 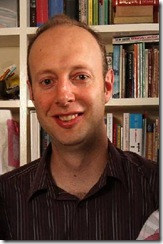 This is a cropping of a photograph taken by professional photographer Chris Bouchier. 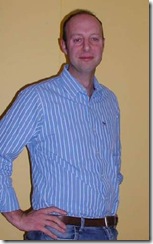 This photograph was taken by my wife using a cheap point-and-shoot digital camera after we’d drunk a couple of glasses of home-made mulled wine.

Both photos are of the same person taken in the same house within 4 weeks of each other. After looking at the photos we came up with the following guesses at how they would be rated on average by the visitors to HotorNot:

*This is my wife of 10 years; she feels she can be brutally frank with me without hurting my feelings**

**Which just goes to show that deep knowledge of someone only goes so far.

By the way, both Pam and Pete work in marketing; multinationals like Philip Morris and Proctor and Gamble pay their organisations a king’s ransom for their insights.

I’m going tell you what happened and what my conclusions are in a second blog post. But for now, it would be fun if you could comment with your prediction of the scores. Don’t worry, my feelings can’t possibly be hurt anymore…I think.

8 responses to “Is your marketing "Hot or Not"?”