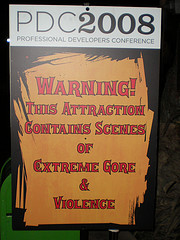 I was at the PDC last week. Maybe I was jet lagged, or maybe it's my slow and grumpy decline into cynicism, but I was underwhelmed. My reaction to Live Mesh, Azure and Windows 7 was "so what". I keep thinking back to 2004 when I saw Don Box's passionate and inspiring demo of Longhorn. Don talked about the three pillars of Longhorn: WinFS, a transactional, SQL Server based file system; Avalon, the new graphics framework and Indigo, the SOAP messaging substrate. Plus, much of the new operating system was going to written in .NET. When Longhorn finally shipped as Vista three years later, WinFS had vanished, Avalon had been emasculated, and the operating system wasn't written in .NET.

So when, or if, all the cool new stuff ships, and if Amazon or Google or Apple hasn't already sewn up that market, then sure I'll take an interest. But for now, bah humbug.

The big news of the week is, of course, Barack Obama's election. Foreigners shouldn't comment on US politics, so I'm going to restrict myself to saying this one thing. It's interesting that despite Obama's overwhelming victory (349 votes in the electoral college vs McCain's 162), McCain still garnered over 46% of Americans' votes. I tried to think of an analogy in the world of software where spending vast amounts of money to gain a tiny competitive advantage can result in such a massive outcome. I couldn't, but I'm sure you can. I'll give a small prize to the best, and one to the most tenuous, analogy that you can come up with, or link to. Post here.

Over on the BoS social network, Dharmesh Shah's video from Business of Software 2008 is up. If you've got a spare hour, it's well worth listening to an hour of Dharmesh's low-key, conversational and wide-ranging talk as he discloses everything he knows about startups.

The most popular forum is post is still "How do we make this succeed?" Lots of interesting comments there. Matt Richards asks how do you define success? Dan Nunan asks what's the point? Chris Herbert says I should ask what you all want to get out of it. So what do you want out of it? Post here.

Elsewhere on the forum, Chris Herbert asks if social media can be used as the foundations of a next generation company. Or has nothing changed, and are they just new tools that you can use to do old stuff better? Post your opinion here.

It's the London BoS dinner next week. Sign up to pizza, beer and conversation.