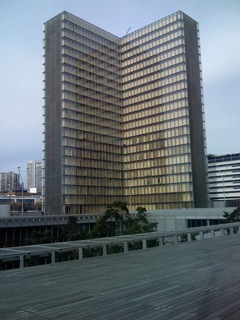 I’ve just come back from a short trip to Paris. Although I enjoy Paris, the Champs-Élysées, Montmartre and the Marais are stifling on a weekend. So on Sunday morning I headed over to Bercy, crossed the Simone de Beauvoir passerelle over to the New Bibliothèque Nationale and watched Blade Runner at the MK2 cinema.

The New Bibliothèque Nationale is an impressive, but odd beast. It’s the largest of François Mitterand’s grands projets. Its four book-shaped, letter Ls, made of glass and 25 storeys high, surround a sunken garden of trees transported fully-grown from Normandy. Its 400km of shelves provide space for up to 20 million books. It cost 8 billion francs ($1.5 billion) to build. It was completed in 1997.

It’s impressive in another way too. It’s an impressive example of our tendency to solve yesterday’s problems. In this case, yesterday’s problem was how to house tens of millions of printed books, and how to store, index and access the hundreds of thousands of new books being published worldwide every year. With Google, and its ambition of organizing the world’s information, I’d call that problem solved. Or, perhaps more accurately, side-stepped. Scanning the 10 million books in the current library, and persuading publishers to release digital versions of their new books are just logistical details and utterly tractable.

Here are some more examples, from the business of software:

I’m sure you can think of more examples, and better ones than I have. Post here …

One response to “Solving yesterday's problems”