A pint with Bill Buxton

Bill Buxton is an astounding character. I’ve had the good fortune to chat with him a couple of times, and I always come away with my head fizzing with his ideas. Most recently, I persuaded him to join a few of us from Red Gate at the Pickerel in Cambridge for a quick pint. I’ll let some of his ideas ferment and I’ll write some more about them in the coming weeks, but here’s a quick taster of some of what I learnt.

Electronic paper is going to be huge. Bill had brought his iRex iLiad device, and the hardware is astonishing (the software less so). It’s about the size and weight of a thin hardbook book, and its resolution is way better than I’d expected. Its display is like a sheet of laser-printed paper, reflecting and absorbs light like ink on paper does, rather than emitting it like conventional displays do. Although there are niggles with the device, it’s utterly convincing that we’re all going to be carrying these things in the future. Of course, exactly which device we all end up carrying depends on factors other than the technology, just like Apple’s success with the iPod was due to software, the iTunes store, DRM, distribution agreements with record labels and so on. Amazon are on the right track with the Kindle though. As soon as they come out in the UK, I’m buying one.

Here’s Bill with his iLiad: 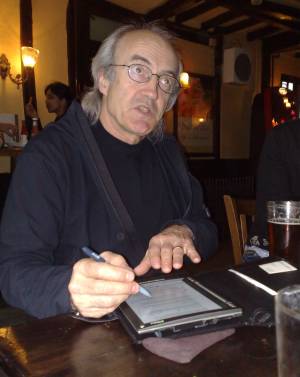 Here’s a close up: 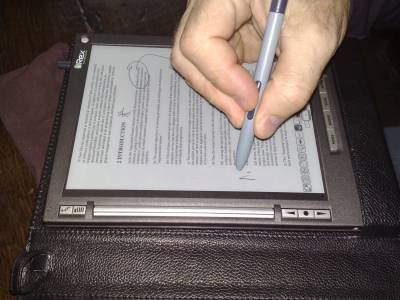 Note how Bill is annotating the document he’s working on. The paper that Bill is reading is Engelbart’s 1968 Study for the Development of Human Intellect Augmentation Techniques. It’s worth a read.

Bill also talked about how people are underestimating Microsoft’s ability to design, and to innovate. Many (including me) have sniggered at the original Zune, but the latest version is actually quite good. Not as good as the iPod, maybe, but that’s not the point. Bill’s point is that you need to separate out the art of design from the craft, and that you must first master the craft before you can attempt the art. Microsoft are now mastering the craft, and they’ll soon be practising the art. Compare Bill’s original brown Zune with the sleeker one on the right and you can see how Microsoft’s design skills have evolved over just 12 months: 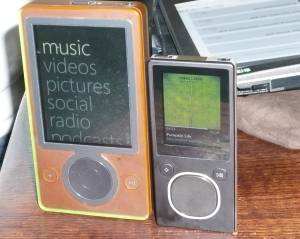 Bill has some other interesting ideas about innovation and invention. Just as Chris Anderson of Wired has his Long Tail, Bill Buxton has his Long Nose. The tip of the technology nose is 20 – 30 years ahead of the face. William Gibson said the same thing differently with ‘The future is here; it’s just unevenly distributed’. Take the mouse you’re holding. It’s been ubiquitous for a decade, ever since the launch of Windows 95. If you’re an original Mac user you’ll think the mouse is 20 years old. If you’re a real old-timer then you’ll know it was used on the Xerox Star and PERQ workstations in 1982. But it was actually invented by Doug Engelbart and Bill English in 1965. That’s a 30 year gap from invention to ubiquity, and it was the popularisers rather than the inventors who got the money and the fame. Similarly, if you’ve been wowed by the iPhone’s multitouch interface and the way you can stretch and squeeze photographs with your fingers then you ought to know that Bill Buxton was building multitouch interfaces in 1985. Don’t expect multitouch to hit ubiquity until 2015.

Bill also has much to say about sketching and design. For example, it’s way better to represent a handful of sketches to users rather than get feedback about a single, detailed, design. With a sketch, it’s obvious that you’ve not invested much time, so users will feel less awkward about giving feedback. Also, if it’s framed as a comparison between two designs, users are more likely to evaluate options and give opinions than if they’re focussed on a single design (‘I prefer the round widget to the square widget’ is easier for people to say than ‘The square widget sucks’). Bill expands on this in his book Sketching User Experiences: Getting the Design Right and the Right Design. If you’re at all interested in product design or development you should get hold of a copy.

Finally, here’s Bill with (from left to right) me, Stephen, Marine, Dom and Tom: 2 responses to “A pint with Bill Buxton”