Last week I was filling my wife’s car up with petrol (gas). It’s a big car, with a big tank. Here in the UK, petrol costs about £1.10 for a litre. That’s about $9 for a US gallon. $200 for a full tank. There’s not much to do as the fuel gauge scrolls relentlessly upwards. Not much but stare at the nozzle in my hand: 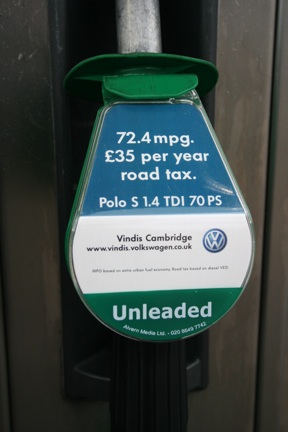 I think that’s a great advert. It’s an example of how interrupting people to tell them something can work. It fulfils most of Dan and Chip Heath’s criteria for stickiness:

It’s also got a lot in common with Google adwords: it’s relevant, targeted and interrupts its audience at a point when we’re interruptable.

But is it effective? Probably. At any one time, roughly 5%-10% of us are thinking about buying a new car. That means that about one million interested, persuadable, interruptable people would see this advert a week (in the UK), assuming a decent campaign roll-out, at a cost of about 5p a hit. I’d like to see a TV ad that can do that.

Another reason that I like this advert is that it goes against the conventional wisdom. Well, the new conventional wisdom anyway, which claims that we are so bombarded with information and marketing – billboards, television, t-shirts, pop-ups and so on – that there is no point in trying to interrupt us to sell us something. We just won’t notice, and if we do notice then we won’t care.

If the conventional wisdom about interruption is wrong here, I wonder if it is wrong elsewhere too; or at least that there are striking exceptions which skilled marketeers can discover. Perhaps the right print ad, or the right banner ad, or the right superbowl ad can still work.

There are some other interesting parallels between petrol pumps and software. I’ll blog about them next week. Subscribe to the RSS feed to keep up to date.

One response to “Advertising that sticks”