Is Google a greater company than Microsoft? The five greatest software companies in the world.

I listed 30 companies and asked you to categorise them as ‘great’, ‘not great’ or ‘no opinion / neither / who?’. 106 people gave their opinions. Here is the split between ‘great’ and ‘not great’: 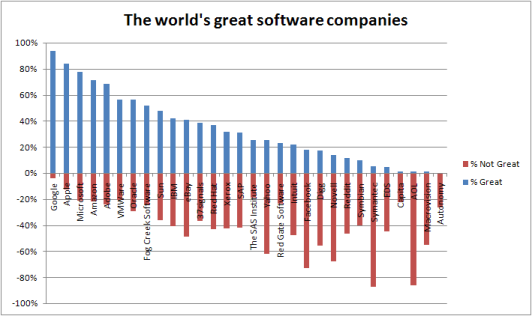 Here, the blue bars above the horizontal present people who voted ‘great’ and the red ones represent the ones who voted ‘not great’.

From this you can see that Google is unequivocally one of the world’s great software companies, while Macrovision is not. You might respond that this is obvious, but I don’t think it is. You could argue that what makes a software company one of the world’s great ones is subjective but there is actually a lot of consensus, at least at the ends of the scales. No matter how people choose to interpret the question, they consistently place Apple in it, and Macrovision out of it, irrespective of theoretical quibbles about whether Apple is actually a software company or not, or whether Macrovision’s financial success makes it great. 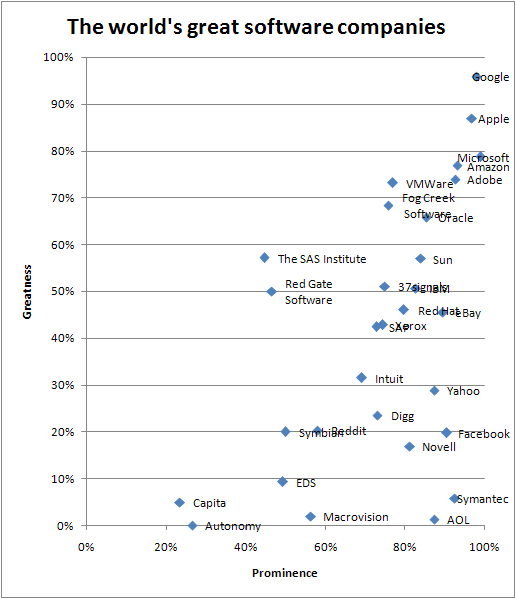 One interesting point here is that greatness seems to imply prominence (Google, Apple, Microsoft, Amazon) but that prominence does not imply greatness (AOL, Symantec, Facebook).

These results confirm most of my prejudices. They confirm that, although individuals might disagree,
there is some collective understanding of what the world’s great
software companies look like.

In conclusion, I think that, unambiguously, the five greatest software companies in the world are:

Disclaimer: I’m the co-founder of Red Gate Software, and I publicised this survey on the JoelOnSoftware forums. That means that the respondents are heavily skewed to software professionals, and that the numbers for Red Gate and Fog Creek are probably inaccurate.

Next week I’m going to trawl through your answers to “What makes a software company one of the world’s great ones?” and see if I can spot some patterns. Make sure you subscribe to the RSS feed and don’t miss out.