Start a software company or work in a bar?

The Micro ISV dream is that of quitting your day job and setting up your own one-man business. Instead of slaving away to make other people rich you can leave your cubicle behind, spend a few hours a day with some light coding and relax while the money rolls in. But is this possible? Can you afford to leave your job? Or should you get a job in a bar instead to get that extra income?

A handful of Micro ISVs are extremely successful. A Micro ISV can sell more than $50,000 a month. These rare successes skew the numbers for the majority of Micro ISVs though. Most one-man bands earn under $25 / hour. The most common number of sales per month is none. The most common amount of sales / month is no dollars. But the outlook isn’t quite as grim as those numbers make out. Read on to get the full picture.

I ran a survey on the Joel on Software forums a couple of weeks ago. 96 people replied. Here are some of the results (you can find the first part of this write-up here). Note that one issue with this survey is that it’s surveying JoS regulars who have the time and inclination to answer a survey: it’s not randomly sampling all Micro ISVs.

The definition of Micro ISV is loose. Some people think of Micro ISVs as being just one-man bands, for others it’s a synonym for small business. This survey side-steps the issue and only asked people who called themselves Micro ISVs: they are self-classified Micro ISVs. Here are their sizes: 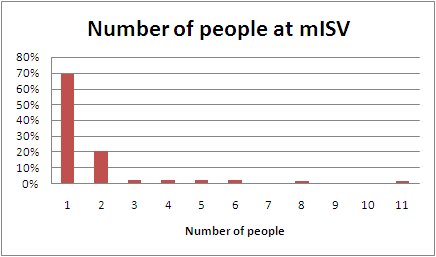 As you can see, most Micro ISVs are a single person. Just 10% of all Micro ISVs consist of more than 2 people.

The average (mean) number of downloads or trials / per month is over 3,000. This is, however, skewed by some outliers [as with all these graphs, beware of the differing bin size which can be misleading]: 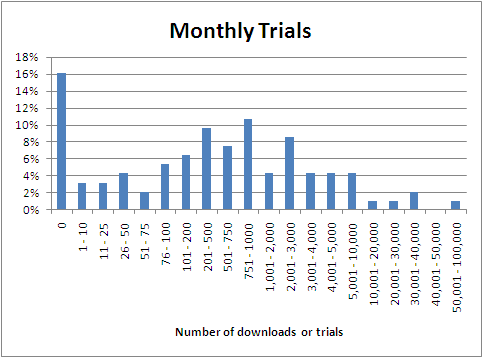 Although downloads and trials are important, it’s sales that really count. Again, some highly successfuly mISVs skew the numbers. The median sales / month is $2,000, but the mode (the most common sales figure) is zero: 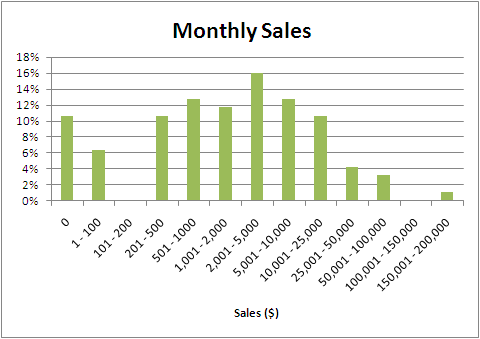 The average conversion rate is almost 8%, but under 3% is much more common: 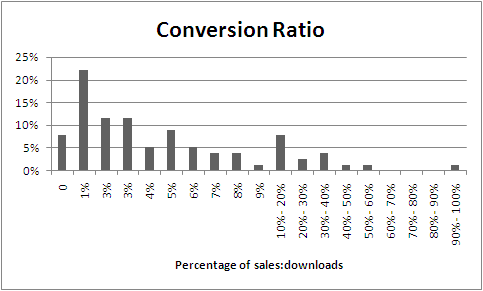 Although some Micro ISVs sell products for more than $50,000, most products are priced at under $65: 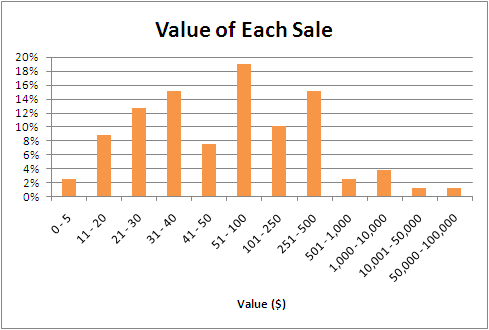 The amount of time people spend working on their mISV varies, from almost nothing to over 80 hours per week. The average (mean) is about 25 hours per week: 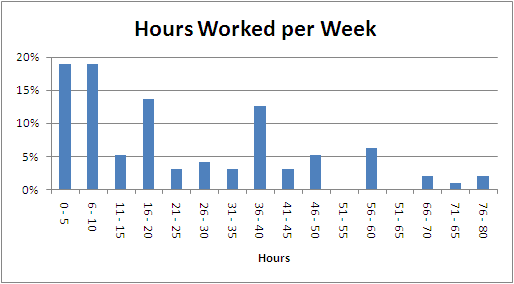 The biggest issues that Micro ISVs face are time, motivation, sales and marketing: 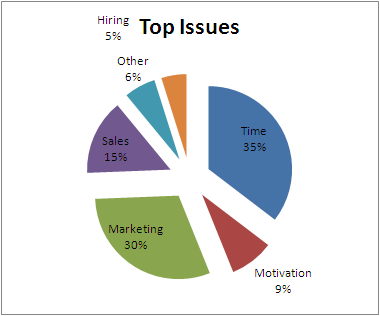 I drilled down into the data and examined single person Micro ISVs who had been in business for 6 months or more (on the assumption that they should be earning money by then). Based on the hours / week and sales / week, and ignoring expenses, here are the hourly salaries: 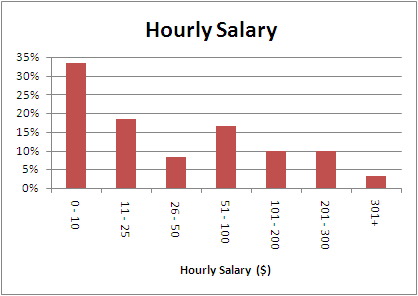 Interestingly, there is only a weak correlation between sales and hours worked. There is, however, a moderate correlation (Spearman’s rho=0.55, p < 0.01) between months the mISV has been going and sales. In other words, there’s only a weak link between how many hours a Micro ISV is currently working and their revenue. How long they’ve been in business is a better indication of how much money they make. Of course, this could be because older businesses are, by definition, those that have not failed, and people making money now might be coasting on past successes.

So what’s the conclusion? Most people don’t have the time, motivation, marketing or sales skills to make it big as a Micro ISV. And running a Micro ISV can take up a lot of time. It’s an interesting hobby, but most people don’t make enough money to quit their day jobs, and the odds are they never will. But it can be done.

Download the raw data (169.5K) for the survey results

21 responses to “Start a software company or work in a bar?”