Porridge, Wonko the Sane and restrooms: the good, the bad and the ugly of user assistance

In the fourth book of Douglas Adams’s Hitchhiker’s Guide to the Galaxy trilogy, Wonko the Sane is a hermit who lives on Santa Monica beach. He has flipped the world inside out. He lives on the ‘outside’ in a small room, while the walls of his room contain the rest of the world on the ‘inside’

Why does he live there? Here’s an extract from the book:

Hold stick near centre of its length. Moisten pointed end in mouth. Insert in tooth space, blunt end next to gum. Use gentle in-out motion.

‘It seemed to me,’ said Wonko the Sane, ‘that any civilization that had so far lost its head as to include a set of detailed instructions for us in a packet of toothpicks was no longer a civilization in which I could live and stay sane.’

Instructions can be necessary though. They’re often needed to recover from bad design. Here’s the sign above the washbasins in the rest rooms of the Pitt building in Cambridge: 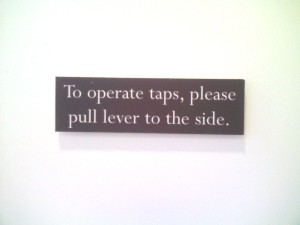 Doors with instructions to ‘pull’ or ‘push’, washing machines and telephones all are common examples of products whose failed design forces necessary but cluttered instructions for everyday tasks.

While we shouldn’t need written guidance on how to open doors or use taps, there are tasks we can’t reasonably expect to work out from first principles or by trial and error. In these cases, we need written instructions.

Designers often avoid text almost pathologically, but written instructions are a good way of communicating complex, conditional and interdependent tasks. A sentence can be worth a thousand pictures, as you’ll appreciate if you’ve ever tried to build Ikea furniture.

At their best, instructions are simple, elegant and built in to the design. They’re not glued prominently on as an afterthought or tucked away somewhere that nobody can find them.

Making porridge is a good example of an infrequent task that requires instructions: 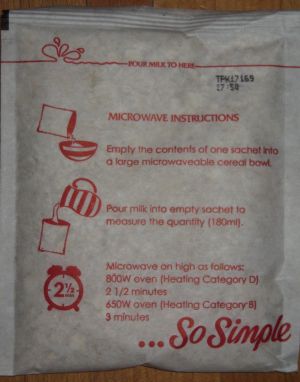 This is an excellent example of good instructions. They’re where you need them: directly on the packet so they can’t be separated from the porridge. They’re clear, well laid out and tell you what you need to know. Also, note the ‘pour milk to here’ mark. The instructions could just have said ‘add 180ml of milk to your bowl’ but a bit of thinking and good design means that the instructions go beyond telling you what to do; they actually help you do it.

So how does this translate into software? First, don’t include instructions just because you can. Every extra word is clutter: if you don’t need it, cut it out. Second, instructions are sometimes a work-around for bad design. This happens, but clearly it’s a last resort. Third, good instructions are often part of the product. Rather than simply telling you what to do, they help you do it or even do it for you.

3 responses to “Porridge, Wonko the Sane and restrooms: the good, the bad and the ugly of user assistance”