Some Things Creep Up On You.

Change is like that. The world keeps on changing but you just don’t notice because you are so close to it but sometimes, something happens that makes you take notice.

Every time you walk into a newsagent, you pass shelves of magazines. Magazine publishing is highly competitive and shelf space is at a premium. One way publishers attempt to sell you their product over a rival’s is by giving away something cool on the cover – this is called a ‘Covermount’.

The Evolution of the Covermount

Computer magazine covermounts show us how much the world has changed.

Covermounts had been used before in publishing – Private Eye was one of the first publishers to use the idea in the 1960s when the magazine sometimes came with a free ‘flexidisk’. The NME did something similar in 1970s/80s – they were pretty rubbish – one play on the record player pretty much wiped the groove clean

When personal computers first became a thing, the world of publishing was an exciting place to be. People wanted information about computers and games and computing magazines became one of the fastest growing segments of the publishing market. (Still not doing badly when you consider shelf space in newsagents despite everything that has happened along the way).

The first magazines had things like this 1983 ‘Software Encyclopedia’. Listing software programmes for different types of machine. 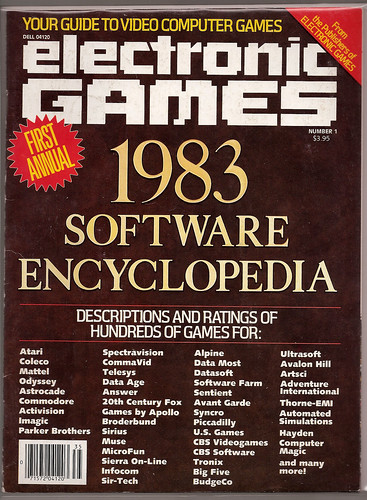 Covermounts for PC magazines started out as cassette tapes with demo versions of software, games, then floppy drives, then CD and DVDs. We have probably become a little immune to them.

I wanted to share a picture of it here. It had sold out in 12 newsagents by 10 am sadly…