Why you should give a Lightning Talk

I came across this guest post from last year today and thought it worth repeating – thanks to Joe Corkery and Zuly Gonzalez for sharing.

‘This is a guest post from Joe Corkery. Joe is Vice President of Business Development at OpenEye Scientific Software in Cambridge, MA. Remarkably, Joe has been with OpenEye for nearly 13 years helping it grow from 3 people to over 40 at last count. In an earlier life, Joe ran away from writing code to attend medical school, only to be drawn back in after graduation. Despite not having access to a prescription pad, he is passionate about drug discovery and the impact computers have on that process, among others.

Joe gave a Lightning Talk at Business of Software 2010, and he was gracious enough to share his experience with us. If you’re still not sure why you should give a Lightning Talk, take a look at what he has to say.’

With the deadline for Lightning Talk submissions rapidly approaching (midnight on August 7th), I thought I’d offer a little perspective on why you should be giving a Lightning Talk.

Giving a Lightning Talk is without a doubt an unnerving experience, but giving one at Business of Software is terrifying because it’s not your average audience. The audience is filled with not only your peers, but also your idols, and a large number of other software rock stars that you just haven’t heard of yet. However, despite the boot-shaking terror that came with giving a Lightning Talk at BoS 2010, it was far and away the best thing I did at that meeting and it continues to pay dividends to this day.

If you aren’t familiar with the concept of Lightning Talks, they are very short time-constrained talks in which you are allowed 7.5 minutes to cover 15 slides (each of which will be automatically advanced every 30 seconds). After all the talks have been given (there are usually between 5-10), the audience votes on the best talk. The winner receives bragging rights, an invitation to the speakers’ dinner and whatever cool electronic gadget happens to be in vogue that year. Winners from previous years have also gone on to give regular talks in the subsequent year’s meeting.

Even if you don’t win (which sadly I didn’t), giving a Lightning Talk provides you with an unprecedented opportunity to meet people at the conference (which if that isn’t your goal in coming to the meeting, you ought to rethink your goals), both before and especially after you give your talk. The fact that you are giving a Lightning Talk is a remarkable conversation icebreaker, particularly at the Sunday night cocktail reception. This is particularly helpful if you aren’t naturally social and can never find the right topic to start a conversation, because the Lightning Talk will do it for you. Mark Stephens (the winner from BoS 2009) helped me (and a few others) out in this regard by introducing us to other groups by name, mentioning the fact that we were giving Lightning Talks, and then letting the conversation take off from there. Most people you will meet will generally be in awe that you’ve agreed to subject yourself to this strange form of torture and will really want to talk to you about it. What’s even better is that because you are putting yourself out there as an opportunity for their schadenfraude, people are much more likely to remember you both during and after the meeting as a result. I was truly amazed by the number of people (including a few of the real speakers) that remembered me at BoS 2011 because of it – it was a great way to start a new meeting.

But don’t forget the other presenters – there is nothing quite like a shared challenge to bring people together and build camaraderie. I still try to make a point of keeping up with a number of my fellow speakers and look forward to seeing them again at the meeting this year.

Beyond meeting new people, the Lightning Talk gives you a rare opportunity to spend time thinking about a specific topic of your own choosing and distilling it down into something you can quickly and effectively communicate to others. I can’t underestimate the importance of this skill and what better way to hone that than by sharing a relevant passion with an open and like-minded audience. Amazingly enough, they let me talk about how Viagra could teach us something about the software business (and it’s not how you think)! The story is a medical version of a business model pivot. Ask me about it at the Sunday night reception.

One of the biggest obstacles to participation is clearly the fear of having to speak on someone else’s clock. And it should be a fear, because it is a serious challenge. Watching the countdown clock staring you in the face really brings it home during the talk. However, with a lot of preparation (about which I’ll write a separate post later), you can definitely do it (and do it well) if you are willing to put in the time. But, even if you don’t pull it off without a hitch, you will still have the respect of all the other attendees for trying and with this crowd, that isn’t nothing.

Finally, if I haven’t convinced you to give this a try yet, how about this: the conference fee for Lightning Talk speakers is waived. So, if you’re just starting up and aren’t sure you can afford to come to the meeting or if you’re at a larger company that is just too lame to pay for you to attend, this is a great way to get a spot at the meeting. 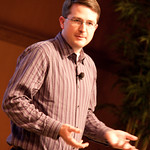 So now, my question to you is, why aren’t you fighting for a spot to give a Lightning Talk at this meeting? Just writing about it has made me excited for the conference; perhaps, I should throw my hat into the ring again and give a meta-Lightning Talk on why it should be you on the stage and not me! For more details on how to apply to do a Lightning Talk, go here. See you in October!